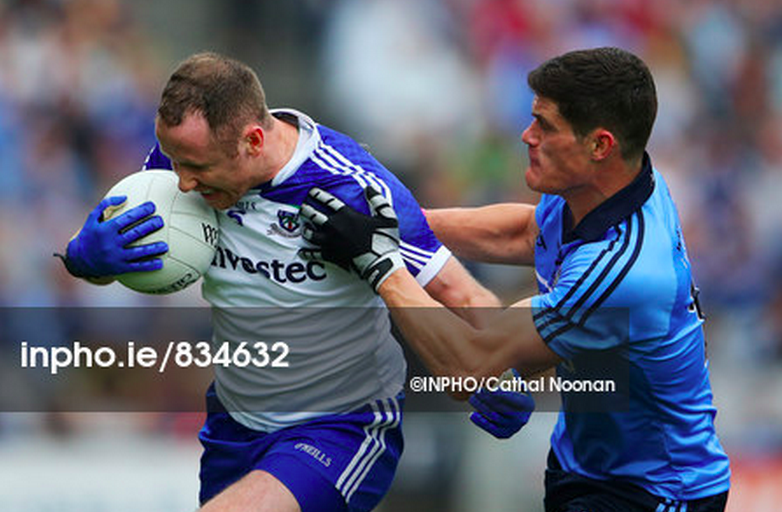 Permutations! Combinations! Calculations! Other miscellaneous arithmetic terminology! If you’re a reader of a GAA website that tries to put a cold and callous mathematical basis for ranking different teams, the last weekend of the football championships is basically your pornography. Strap on your NSFW tags, folks, because here come the permutations…

Cork are guaranteed a spot in the knockout stages final with 10 points; Monaghan are on 8 and the Dubs are on 7. Donegal, Kerry and Mayo are all on six points and could still scrape a spot; Tyrone are on 4 and no results can get them into the knockout – but even a win may not save them from relegation.

The top four make the semi-finals; the bottom two go down.

Monaghan (6th, 1711) v. Dublin (1st, 1912)
Monaghan are almost safely into the semi-finals but could use at least a point to be sure. If the Dubs get a win and make it to 9 points, they’re safe; if that’s the case, Monaghan remain on 8 points and will end up tied with Kerry (if they beat Tyrone) and the winner of Donegal and Mayo. If it’s a two-way tie, Monaghan would trump Donegal after beating them in the group phase, but would be pipped by Mayo. If Kerry also win, then oddly, Monaghan should be safe by virtue of a very healthy scoring record.

Elo makes the Dubs 61.4% likely to trigger this implausible scenario.

Tyrone (7th, 1595) v. Kerry (2nd, 1855)
Tyrone’s last outing was, in Mickey Harte’s own mind, their worst in his reign. On 4 points, only Derry (1) are lower. If they win on Sunday (only 32.4% likely) they’ll be tied with Kerry and the losers of Donegal-Mayo on six points. Given how both Donegal and Mayo have great scoring differences, Tyrone will need to win by at least two points, and hope Donegal win by 20 or Mayo win by 15. (Those required margins of victory come down for every score, beyond 2, that Tyrone might win by.) All quite unlikely.

Not quite as much confusion here – mostly thanks to the fact there are only two promotion places up for grabs – but still a fascinating one. Down are on 9 ahead of a three-way tie between Roscommon, Meath and Cavan on 7. Galway are on 6 and need a freak run of results to make it through – but could still also find themselves relegated.

Westmeath (19th, 1124) v. Roscommon (13th, 1365)
This is where things get slightly more complicated. Roscommon drew with Cavan and beat Meath, but have an overall points difference lower than those two sides. That means Roscommon’s best chance of securing passage to the final is to win – especially when Meath and Cavan face each other. If the Rossies win, they can only be overhauled by Cavan winning in Navan – and then it comes down to margins of victory.

Westmeath are second-from-bottom on 4 points and urgently need a win – especially when Galway, on 6 points, are at home to bottom side Kildare.  Mullingar the venue, but Roscommon 65.7% to prevail.

Meath (9th, 1457) v. Cavan (16th, 1297)
Winner make take all, or alternatively, nothing. The winner will go to 9 points, to be matched by Roscommon should they win in Mullingar. That matters differently to the two sides competing in Navan: if it’s Meath and Roscommon, the Royals will lose out after being defeated by two points in Dr Hyde Park. If it’s Cavan and Roscommon, it will come down to score difference, with Cavan currently having a two-point headstart. If Roscommon are defeated by Westmeath, a draw would be enough for Meath.

Dr Elo says Meath – on the back of a hugely necessary win in Newry last week – are 76.8% to get the win. If that’s the case, they’ll need a big favour from their neighbours in Maroon.

Galway (14th, 1349) v. Kildare (11th, 1426)
Galway are one of the sides who could slide either up or down, depending on results. They’re only two points off the top, on 6, but lie fifth in the table. Intuition says they want Down to lose, so they can join them on 8 points, but because Down already beat Galway, that’s no use. Therefore they need Down to lose, and Meath and Cavan to draw – putting the quartet on 8 points each and having the group decided on points difference rather than head-to-head record. If that’s the case, things get even more complex – because that’s where Roscommon come in. If the Rossies win, only one of that quartet can qualify; if not, then there are two slots open. Galway can come top of the teams on 8 points if they beat Kildare by a margin of 15. They could come second if they win by 10.

But there’s also the question of the bottom of the table: Galway aren’t yet safe. A straight head-to-head against Westmeath (currently 4 points) is fine, as Galway won by a point in Mullingar. But if Kildare win, they’ll join Galway on 6 points and then beat them on head-to-head record. Laois are currently on 5 points and would leapfrog both of them if they could beat Down.

The bottom line for Galway is that they need to win, and win well – firstly to safeguard their status in Division 2; and secondly to capitalise on any bizarre results higher up the table. Elo says they’re only 52.6% to manage that to begin with.

The top of Division 3 might be straightforward but the bottom is anything but.

Clare (23rd, 1022) v. Fermanagh (18th, 1233)
Fermanagh are on 11 points, undefeated, and guaranteed to meet Armagh on a Saturday in Croke Park in a few weeks’ time. This is their dress rehearsal, and are 62.5% likely to win it. Clare, in all honesty, can probably afford to lose as long as it’s not by a horrifying margin – but a draw or win would absolutely safeguard their status in the division.

Tipperary (17th, 1285) v. Wexford (24th, 1016)
Tipp are the only side who are totally, absolutely guaranteed to remain in Division 3 next year. Wexford are at the bottom on two points and need a win (and a strong one, at that) to have any sort of salvation. They’re only 15.5% likely to get it.

Sligo (22nd, 1066) v. Armagh (8th, 1507)
Armagh are the other guaranteed finalist so may, arguably, have little interest in going hell-for-leather here. That could suit Sligo, who only get a 17.2% chance of winning, and who currently lead the pack of four counties with 4 points. Even if they lose, they’re likely to remain happy – they’re the only one of the sides on 4 points with a positive points difference, and it will take a remarkable confluence of results to relegate them.

(For the record, Sligo can only go down if they lose, Clare defeat unbeaten Fermanagh, and Louth and Limerick draw. A loss for either of those latter sides would require Sligo to be beaten by 35 points in order to have an inferior scoring record.)

Louth (20th, 1116) v. Limerick (25th, 1016)
These two sides are locked on 4 points apiece but stand 6th and 7th because of their dire scoring record (Louth -24, Limerick -25). A win puts one side on 6, leaves the other on 4, and saves the victor. A draw would probably save both, but would see Limerick go down if both Sligo and Clare were also to win. Basically, the winner here survives for another year. Louth are 71.5% likely to be those winners.

Longford are already safely into the final – the only two sides who could overtake them are playing each other, meaning they’re in a straight shoot-out for second place.

Leitrim (28th, 881) v. Waterford (30th, 668)
Leitrim have an identical record to Carlow’s, while Waterford’s only win came against Wicklow on the opening day. Waterford are only 19.1% likely to add to that previous win.